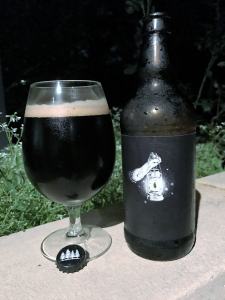 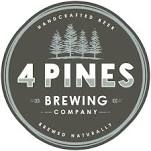 The ever prolific 4 Pines put out this beer last year as part of a Keller Door (non-core range) black beer series in 500mL bottles called the Black Box of Dark Ales. Along with the Black IPA, came a Schwarzbier (yet to try), a Russian Imperial Stout and a Coffee Porter. They’re all pretty good.

It’s black alright. The black writing on the black label is so black I can’t read it. It pours oily black, with a cappuccino coloured head that dissipates to a thin film and a medium level of lacing. Roasted malts dominate the aroma, with hints of cocoa and resinous pine hops. It’s a tough beer to nail down in terms of flavour. Initially bitter grapefruit and pine hops work towards a sweet chocolate mid palate and long, roasted coffee finish. A huge hop level (77 IBU’s if you don’t mind) underpins the entire beer though, meaning the sweetness doesn’t get out of hand.

My favourite of the Black Box to date.