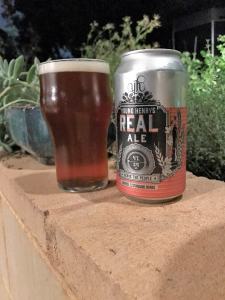 One of the original inner-west Sydney craft breweries, Young Henrys embraces their local community like no other. The stuff seems to be everywhere through Newtown. Their beers tend to lean towards the more traditional, looking towards the subtleties of the Old Dart rather than the brashness of the Yanks. And there’s nothing wrong with that!!

Can. Pours an amber colour, with a solid, well retained off white head. The aroma is dominated by a big biscuit and bread malt bill, with the hops only gently represented by earth and lemon blossom. Biscuit and caramel malts open up the flavour profile. Moderately bitter earthy hops work through the mid palate, finishing with an ever so slight sweet biscuit and bread. Unfortunately the can I reviewed was over-carbonated. This is Pommie flat beer territory, so it’s disappointing, although the previous times I’ve drunk it I hadn’t noticed. It would be good on a hand pump at the Keg and Brew or Local Taphouse. Make sure you don’t drink it cold out of the fridge. Just let it warm up to about 8 degrees.