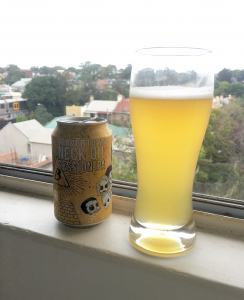 Originally beginning life out of a BBQ restaurant in Hackney, East London in 2011, Beavertown have since rapidly expanded their operation to become one of the leading breweries on the city’s craft beer scene. Known for the unique artwork on their cans, they produce a solid core range for a growing loyal fan base.

‘Neck Oil’ is an IPA specifically brewed for easy drinking. At 4.3% ABV, its light, hoppy and refreshing. Pineapple and passion fruit are dominant in the aroma, with a hint of pine lurking in the background. From the can it pours a light straw colour with a thinnish white head. On sipping, zingy lemon notes are prominent on the palate with subtle grassy hops on the back end. For me, a touch more bitterness in the finish would take it to the next level.

Overall, I found Beavertown’s ‘Neck Oil’ to be just that – a crisp, sessionable IPA, designed to lubricate the throat on every mouthful.

* Can from Bucket Boys, Marrickville