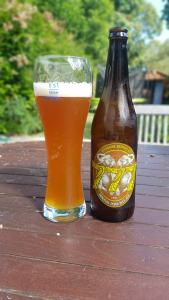 After just having the citrusy IPA this was a direct contrast. Pours a dark brooding orange reddy colour. Extra hopped, malty, balls deep in your palate fair dinkum IPA. It’s got 4 hop varieties which hit the pine and citrus notes but in an extremely subtle way. The malt is quite aggressive but it’s not over the top to the point that it cancels out the hops. It’s a very aggressively hopped IPA and not for the faint hearted. At a whopping 9.2% it probably should come with it’s own UBER. Sam from the Robin Hood Hotel had a smile on his face when he recommended this one and I now know why. File this one under hurts so good! It’s fantastic, but for experienced hoppers only!