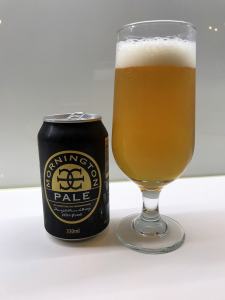 Mornington Peninsula Brewery is a great spot in the industrial zone of Mornington, where I was lucky to visit about five years ago. I had a ball sampling all of their beers and having a bite to eat, in the days before a microbrewery was even a thing in Sydney and beards were a long distant memory from King George’s times. Their brews are a little hard to find in Sydney, but I picked this can up from The Robin Hood Hotel bottle shop, and I’ve also seen them at Leura Cellars (another great beer shop).

Can. Pours a hazy, pale gold with a frothy white head. Gentle aromas of citrus, slightly more forward elements of passionfruit and then a whack of spicy wheat. Due to the wheat malts it’s quite spicy upfront, but the middle palate is a little hollow and lacking flavour. There is a moderately bitter and spicy finish, which has decent length. The wheat malts are little unusual in an American Pale Ale, probably reducing the depth of flavour, however it grew on me as I drank it. It’s a knock ‘em back at a BBQ type of beer and there’s certainly nothing wrong with that.