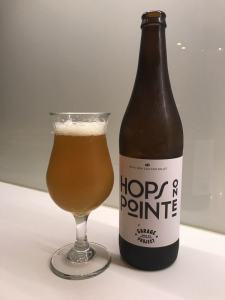 This is a second review on this beer as I think it’s an interesting exercise on ageing. Or maybe I’m just a nerd and nobody cares? This beer was brewed by the magicians at Garage Project for the Royal New Zealand Ballet. My initial review of this beer was from a can and inside the expiry date. This new review was from a bottle and 18 months past the used by date. Usually I’d be annoyed noticing this after I’d left the bottle shop, but in this case the result was a superior beer. Be warned though, not all beers can be aged, and you should be wary of older beers relying heavily on hops. The 6.7% alcohol certainly helps (and mellows in the process), as does the Champagne yeast, a wine known for his ageing ability. I would have thought the winey Nelson Sauvin hops would be better fresh, but they remain relevant in the older beer.

Bottle. Pours a cloudy gold, with thin white head and spotty lacing. Tropical fruit remains at the forefront (mango, pawpaw, melon, lychee), along with honey (thanks to the ageing) and pepper. The palate is initially spicy, leading to a slightly sweet middle and moderately bitter finish. The Champagne yeast produces a refreshing dryness. The alcohol has been tamed through the ageing process, with it being obvious in the newer beer, yet integrated in this beer. High carbonation remains, however it is spot on unlike the newer beer.

The ageing process has changed the beer from one I didn’t particularly enjoy to one that I did and if I was dragged along to the ballet, I think I would need the 675mL bottle of 6.7% ABV beer to get me through the second half!

The next installment of aged beer? Coopers Vintage night. Five vintages in a vertical tasting. One of the best beer nights of the year!