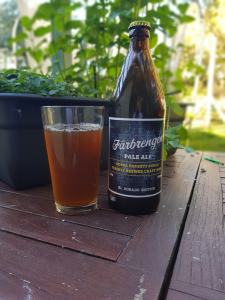 Our first instagram follower Homebrew submission! The back story for this one is great, a few congregants from a Synagogue (Jewish church) in Sydney’s east meey every couple of months and brew beer!!!! How awesome is that! Farbrengen apparently means ‘joyish meeting’ in Yiddish.

The beer itself poured a really dark earthy orange with no carbonation (not uncommon in a home brew). It’s on the sweeter side which is unusual for a pale but it really grew on me (they might be onto something here). Quite a sweet malty aroma with a sweetish malty taste. I quite liked it, well done guys! Could end up being the chosen brew with some more aggressive hops.