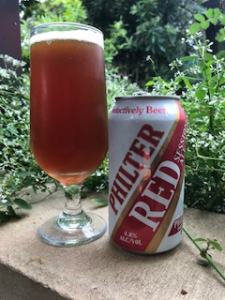 Relative new comer Philter Brewing adds to the feeling that inner west Sydney is the centre of the city’s craft brewing scene. The former Young Henry’s head brewer is behind Philter, and she’s made sure that with a small, two beer range of well made and simply packaged beers that early traction has been made in the local pubs and bottle shops. #drinklocal

Can. Pours a deep caramel colour, with red tinges and a small cream head. Aromas of passionfruit, rockmelon, watermelon, lemon blossoms and strawberries. Light caramel maltiness leads into fresh citrusy hops, moderate bitterness and a clean finish. Simple, balanced, well made and sessionable. Exactly what they promise – I’ll be buying this one again and not just a single can.