Eyes Brett IPAAnchorage Brewing Co The Ghost In Their

Eyes Brett IPAAnchorage Brewing Co The Ghost In Their 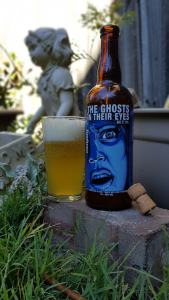 The ghost in their eyes brett IPA from Anchorage Brewing Co in Alaska. Brett or Brettanomyces is a type of yeast strain that has that banana bready mouthfeel not dissimilar to traditional farmhouse yeast strains. In an IPA it is purely spectacular. I could talk about this beer for months, I could write a book about this beer, I could create a movie trilogy longer than The Lord Of The Rings about this beer. This is the beer you bring to a beer nerd convention and say “try this” and set back and watch the wonderment appear on peoples faces.
It’s brewed with citra and galaxy hops and fermented in oak tanks with a Belgian yeast and two strains of brettanomyces. It’s dry hopped with citra and galaxy hops and bottle conditioned for natural carbonation. It pours a lush lemonade yellow with strong bready mouthfeel and banana yeasty palate. Strong citrus in the middle with a grapefruity tartness rounding off with a very mild bitterness from the hops. It’s 8% but you won’t notice as it’s spectacularly well crafted.
This beer is F@#k off good. My god I’m in heaven…..