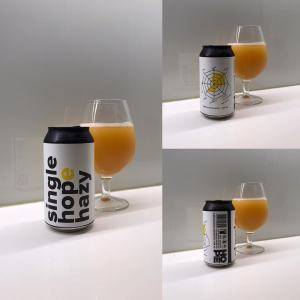 Sometimes single hop beers can be a little one dimensional, lacking the balance of different hops to advance aroma, flavour and bitterness. The @hopeestate Single Hop Hazy on the other hand does a marvellous job. It uses the new hop variety of Sabro, which I admit I hadn’t heard of before. It’s a really interesting and unusual hop (in a very good way) in that amongst other profiles, there is a very obvious coconut and I love coconut in beer. Although the word hazy is used in the title (it does pour hazy), this is a hop forward American IPA as opposed to a NEIPA. A lot of the NEIPA fruit elements are there, but the bitterness of the hops are more pronounced and the mouthfeel is sharper. I’ve had this beer on tap and can now. My notes are from the can, but it was slightly better on tap, just suffering from a touch of over carbonation and the advantage of being two months fresher on tap (the can was still under three months old though, so was fresh). Hard to find I imagine, but definitely one to grab if you see it. Awesome can too.
Can. Pours hazy, golden honey colour with a small white head and minimal lacing. Aromas of stone fruit and grass, with lots of coconut, mango and pineapple, underpinned with grapefruit and orange rind. Quite spicy/grassy to begin and then the coconut hits, with plenty of mango, pineapple, peach and apricot. It’s no fruit bomb though, with everything kept nicely in check with moderate bitterness provided by grapefruit and orange peel.
Trent. 3.9 on tap @maltbarrel . 3.8 in can purchased from @lugarnocellars