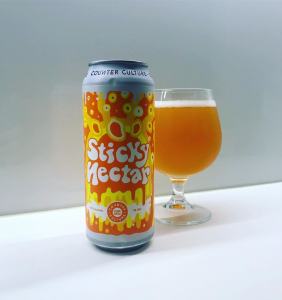 I’ve been hanging out for the second @counterculturebeer instalment since the Imperial Berliner Weisse Killer Kween. Next in line from @stoneandwood ‘s alter ego is a beer with some commercial descriptors you might expect from the Byron Bay heavyweights, with mango, tropical hops and summer being thrown around. This is no Pacific Ale though, this is a pimped up hazy IPA filled with mango puree, vanilla, smooth lactose, plenty of bittering hops (45 IBU) and lots of balancing malt.

Unlike the Killer Kween, which was an original creation, the Sticky Nectar started life as a ‘Pilot Batch’ beer that’s been tinkered with after drinkers feedback. Like the Killer Kween however, it’s only available for eight weeks and it will never been seen again, so get it quick (see the link for stockists below). Is it a NEIPA? Is it a Milkshake IPA? Probably neither to be honest (too bitter and not quite creamy enough), but that’s fine by me, because it’s delicious, and I want more of it. Can’t wait until instalment three (something big and black to suit late July?). Can. Pours a hazy, light honey/gold with a frothy white head that dissipates quickly. It’s not as dense as a NEIPA that’s full of oats. The mango leaps out of the glass, but’s there’s also passionfruit, peach and hints of orange. It’s creamier than the aroma suggests, with lactose and perhaps a hint of vanilla up front. Relatively firm grapefruit bitterness quickly takes over, before its bought back in check by hints of honey and light caramel malts.
A big thank you to Stone & Wood/Counter Culture for sending this out to us. 🙏
4.1/5. Trent.