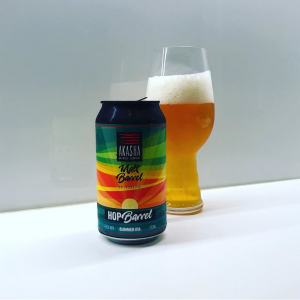 Hidden inside suburban @clubrivers , is a great little craft beer bar, @maltbarrel . Revolutionaries in terms of bringing rotating taps (about eight at a time) of independent goodness into club land, it’s a fantastic spot to go for a growler fill. With @akashabrew on the regular tap list, a collaboration between the two is a great idea, and the Hop Barrel Summer IPA an even better beer. Somewhere between a West Coast and East Coast IPA, it has plenty of fruity hop aroma and flavour, with only moderate bitterness, but a light, summery mouthfeel. I’ll be buying more and will have to swing by Club Rivers to try it on tap.
Can. Pours a light gold with quite high clarity and a thick, foamy, well retained white head. Juicy aromas of stone fruit, raspberries, passionfruit and grapes, as well as grapefruits and a touch of caramel. A more mellow, but equally delicious flavour profile, with citrus blossom, stone fruit, passionfruit, raspberry, moderately bitter pine and biscuity backing. Light, refreshing mouthfeel.
3.9/5. Trent. Purchased @lugarnocellars