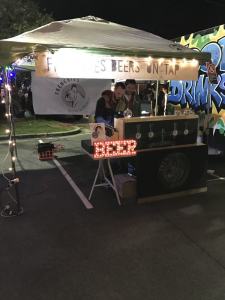 Two French mates living in Australia. One a brewer. One a chef. For now the concept is simple – serving pretty good beer at markets (Peakhurst Food Markets on this occasion). But give it two months and their Parisian style bistro and bar will be open in Rosebery. It will rocket to the top of my ‘must visit’ places, because as I’ve said before, I’d love to see food that isn’t southern American in a brewery (think terrine, rillettes, bone marrow on toast, meaty braises, seasonal veges, gratin dauphinois and cheese in all its wonderful guises). Lets hope they brew plenty of French style beers – saisons, farmhouse ales, biere de gardes.

Tonight I drunk the Comet Pale Ale, based on the old fashioned comet hop. It’s labelled as an American Pale Ale, although I’m not convinced. Doesn’t mean its not an enjoyable beer though, it is. Quite light and a little cloudy, with a frothy white head. Muted tropical aromas. Moderately bitter with subtle caramel malts and enjoyable grassy and peppery flavours. Would be a really good beer with creamy French cheese.