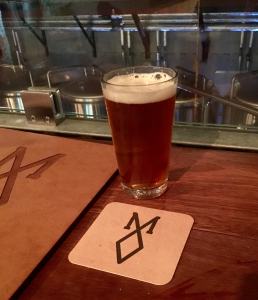 Friday was a crisp night on the Northern Beaches. You Am I were in town, playing a small show at Narrabeen RSL. Not being from the area, we embarked on a road trip across the harbour.  A licensed establishment for a pre-gig drink was called for. Enter, Modus Operandi, whose brewery I have been wanting to visit for some time now.

Down a little side-street off Barrenjoey Road in Mona Vale, it’s a big space, with plenty of room to spread out. We pulled up a chair at the bench upstairs, overlooking the shiny array of beer vats and peroused the menus.

Food-wise, burgers and pizza are the main offerings. I went with the Southern Fried Chicken burger. Pretty tasty in my opinion..nice strip of bacon, tender chicken and plenty of sauce. I can also attest to the quality of the beef burger (from the bite or two I had of my partner’s).

I was driving, so being the responsible person I am, I couldn’t settle in and sample the whole range of beers they are currently pouring. I started off with the ‘Pale Ale’ before moving onto the ‘Sonic Prayer IPA’ pictured above. Simply put, it’s a cracking beer! Lots of tropical fruits hitting the senses, a hint of pine and a good touch of bitterness in the back end.

I’ll definitely be back to Modus Operandi, sooner rather than later!

On a side note, You Am I played a stellar set to a packed room of punters, with Tim Rogers being in top form as always.