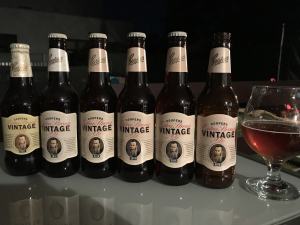 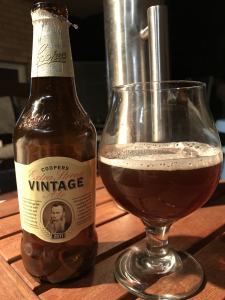 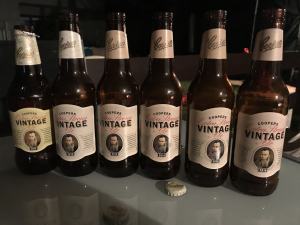 One of the most anticipated beer nights of the year, a mate and I have been quietly purchasing six packs of Coopers Extra Strong Vintage Ale each year and leaving them to age in the cellar. Annually we sit down and sip six vintages in a vertical tasting, appreciating the ageing process of this fine beer. Friday night was the night, sitting outside in 5 degrees with a blanket, beanie and warming strong ale (or six, from 2016 through to 2011).

Without going into full tasting notes for every vintage (available via trade@brewsbuzz.com), the base of each beer was similar. Deep amber colour, with candyfloss, musk, clove and ester aromas. As the beers aged the spicy hops obviously mellowed, but nuts, marzipan, cherry, honey, caramel and grog (7.5%) were a common theme. The unanimous winner was the 2012 (impeccably integrated, spicy/rye like hops not present in younger vintages, a delicious salted caramel savouriness, along honey, cherry and marzipan – 4.1/5), closely followed by the 2016 (complex, yet well defined elements – aromas of musk and honeydew melon, filled with bitter, vibrant hops 4/5). Opinion differed with the final four, but my order was 2015 (3.9/5), 2014 (3.8/5), 2011 (3.6/5), 2013 (3.6/5 – slightly off-putting fizz to the palate that I can only assume is part of the ageing process, as I experienced this in the 2012 Vintage three years ago).

Ageing beer is a fascinating process if you pick the correct beer (generally higher in alcohol – 7.5% for the Vintage Ale – and not reliant on hop freshness), store it correctly (dark, cool conditions) and have patience. See my previous review on Garage Project Hops on Pointe for another example of a beer that aged gracefully. I suggest finding a like minded drinker, buying a six-pack of the 2016 Vintage which is still floating around, pick up the soon to be released 2017 Vintage and start your own Coopers Vintage night.