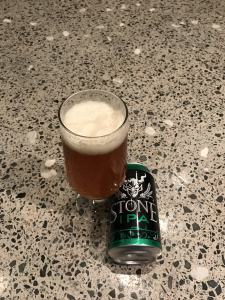 Stone Brewing’s IPA is THE standard in West Coast US IPA’s. This beer has been in the stable since 1997 with only a slight tweak of dry hops (Coopers was as good as it got in 1997 Australia to put in perspective how long Stone have been making quality IPA’s) and has been copied by many since. There may be better (not many), but it’s a West Coast IPA to judge all others.

Can. Pours a honey gold, with a heavily laced off-white head. Inviting aromas of grapefruit, passionfruit, pepper and pine needles are all underpinned by big caramel malts. Big, aggressively bitter grapefruit hops dominate the front of the palate, with some pine elements. The caramel malt middle is understated, but perfectly balancing, ensuring the hops don’t become cloying. The finish is long and dry, with a lick of pine cones. At 6.9% ABV it’s relatively big, but the alcohol is so well integrated it’s undetectable, until you’ve reached the end of the glass and start pouring another!