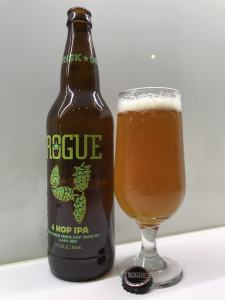 Following on with my West Coast IPA binge over the last couple of weeks, comes another one from Oregon. This time a Session IPA from Rogue Ales. Doing it since 1988, I love these guys. I’m yet to have a beer from them I wouldn’t have again. Not only do they brew, but they grow various malts and hops at Rogue Farms. This beer has been created using four of their aroma hops – Rebel, Freedom, Yaquina and Alluvial (hence the ‘4 Hops’ name).

Bottle. Clear gold, with an orange tinge, frothy white head and medium lacing. Inviting tropical fruit aromas of passionfruit, papaya, grapefruit, honeydew and rockmelon, along with with a touch of pepper and only a minimal amount of caramel malt. Given the hops are all aroma varieties, the flavour profile isn’t as fruity as the aroma. Instead its peppery, with grapefruit pith and a long, dry finish. The limited malt profile leads to a relatively light body, but its very well balanced and highly drinkable. A great Session IPA.