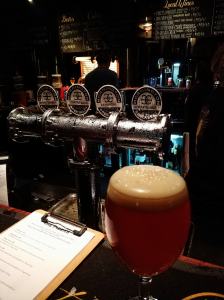 I was lucky enough to be down at the Mornington Brewery and the guys had a limited selection indefatigable on tap. I tried my luck asking for a pint, but was advised i could only have a pot. It sparked my curiosity and i knew i was in for something special.

This belter of a triple IPA ( dubbed an imperial IPA) sits at 12 %ABV.

Pours medium gold, it has a  strong alcoholic taste, as could be expected. The front end of the beer is quite sweet for a highly alcoholic beer that is absolutely loaded with hops. There is so much going on, it’s hard to describe. It’s almost like a mead, where the honey and alcohol dance together. I may have also had a few beers under the belt by that time of the night.

This beer is not for the faint hearted, but a delight if you can handle strong beer. – Leigh