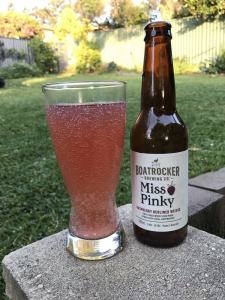 “For a hard earned thirst, you need a big cold beer, and the best cold beer is …… PINK”. It may be pink, but the Boatrocker Raspberry Berliner Weisse is my new ‘after mowing the lawn beer’.  There isn’t many examples of Berliner Weisse going around in Australia, but as the name would suggest the style originates from Berlin and is essentially a sour wheat beer, very low in alcohol (3.3% in this case), very low in hop bitterness (5 IBU’s in this case) and very high on refreshment value. Boatrocker’s version has 100kg of fresh raspberries added to the ferment.

Bottle. Pours a cloudy light pink, with a quickly dissipating white head. Aromas of lemon and lime blossom, lactose and raspberries. Great initial lactose induced tartness, without being mouth puckering, followed by gentle fresh raspberries, wheat and a tart raspberry finish. The carbonation drops off quite quickly, which is probably a slight style fault, but doesn’t particularly detract. A slight savouriness, combined with the perfect level of tartness makes this a highly refreshing beer. If I had a six pack of them, there wouldn’t be any left.