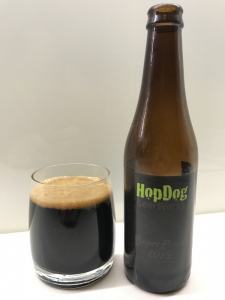 Not too much Barleywine gets made in Australia. It’s probably because of our climate, but huge groggy ales just don’t seem to be the Aussie drinker’s ‘thing’. Two versions – English (the original) and the American. Both are hugely rich malt monsters, but the Americans amp it up again, adding truckloads of hop bitterness as well. Each year HopDog BeerWorks, a south coast NSW outfit that has been on the scene for longer than most, puts out an anniversary Barleywine known as the Superbeast. They age well, and I usually try to keep mine for a couple of years at least. For some reason this winter I didn’t get to the 2014 vintage. Too scary for a weeknight (10.5% alcohol, 100 IBU’s) and the weekends always seem to be too busy to sit down and fully appreciate its complexity. So here I was on holidays in mid-September. What better way to spend a coolish night than sipping on an aged American Barleywine?

Bottle. Black with thin mocha head. Aromas of treacle, brown sugar, coffee, vanilla, rum and high percentage cocoa. Incredibly complex flavours of pine, citrus and earthy hops, moving into treacle, brown sugar, lactose, vanilla, rum, raisins, a hint of muscat, sweet chocolate and a touch of smoke. Moderate bitterness works throughout the beer to ensure it doesn’t become too sweet. Incredibly complex and utterly delicious. Despite its size, I wished I had another bottle to open and keep sipping well into the night.