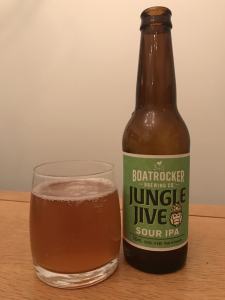 Boatrocker shouldn’t need any introduction since they have two beers in the top 10 for all Australian beers on ratebeer.com, including the first placed Ramjet Whisky Barrel Aged Imperial Stout. Their beers often look towards Europe and involve time consuming methods such as barrel ageing. This makes for small batches and amazing beers. They seem to be pushing out a bit more volume of late however, meaning access into the big liquor stores. Enter the Jungle Jive Sour IPA. A great introduction for people wanting to try sour beers, as it’s not too complex, just delicious. My tip if you see a Boatrocker beer on the shelf? Buy it.

Bottle. Pours a hazy gold with a small white head. Aromas of pineapple, tropical and stone fruit, as well as a touch of white wine vinegar. The fruity aromas are pushed away by an immediate sourness on the palate, full of delicious vinegar and vinous notes. The flavours then move into a fruit cocktail of grapefruit, pineapple, mango, with a typical IPA caramel malt underpinning the whole beer.