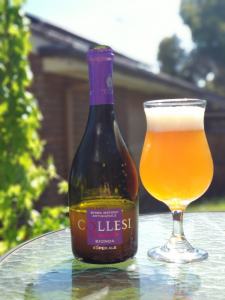 I was gifted this bottle from a friend at work who i have shared my home brew with on occasions. It’s definitely not a beer i would pick off the shelf, but it’s also a little hard to source.

I’ll get right down to the review and try my hardest to ignore where this beer has come from and the style (I don’t drink this style of beer regularly and i generally avoid Italian beer, due to some bad experiences)

A cloudy malt affair produces a light straw aroma with a reasonable amount of head retention. The flavour follows the aroma, there’s a malt-straw feel and taste on the tongue. The beer has a small amount of yeast funk that lingers in between the body of the beer. The beer has a very raw feel to it, probably due to the fact that secondary fermentation occurs in the bottle.

The crown seal locks away the beer to continue the fermentation process. As you continue sipping the ever so soft stone fruit aroma starts to come through and features over the now saturated malt flavours.

The subtlety is a saving grace for this beer for me. Sitting as a 9% imperial ale, it’s quite smooth once your adjust your palette beyond the body of the beer and get into the nitty-gritty.
I’d rate this as the first Italian beer I’ve enjoyed in many years.