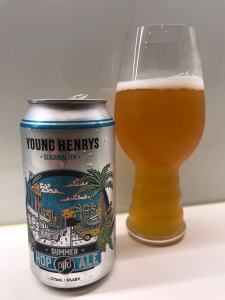 The Winter Hop Ale Red IPA was reviewed by BrewsBuzz several months ago. It was a cracker of a beer and the summer version is beautifully crafted as well. So good in fact I bought a case to enjoy over the break. It’s easy drinking enough to smash back after a hot day, but with enough complexity to sit down and think about if so inclined. Despite being touted as an American Pale Ale on Ratebeer and Untappd, I’m sticking with the brewers description. This is an IPA, and despite its 6% ABV, a highly sessionable one.

Can (with a cool summer themed Newtown streetscape). Hazy bright gold with a frothy well retained head. Big tropical fruit aroma – pineapple, passionfruit and nectarine and peach. The flavour profile isn’t as fruity, with drier, spicy hops with a hint of caramel in the background. As it warms the stone fruit emerges however. Moderate bitterness. Perhaps a touch over carbonated, a problem I find in a lot of cans.