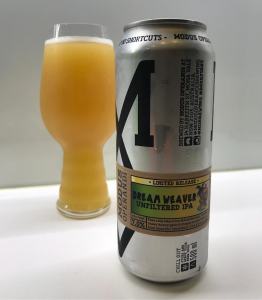 Advertised by Modus Operandi as an ‘unfiltered IPA’ and listed by Untappd as a NEIPA, I’m not really sure how to judge this beer without knowing how they made it and what ingredients they used. One thing is for sure, there’s plenty of hops in it. I would suggest it’s a big IPA that just happens to be cloudy and some have interpreted that to mean NEIPA. While this one isn’t my favourite from MO (just a touch big for me), some will love it, including BrewsBuzz’s own “too many hops isn’t enough” Tim. Perhaps it’s a good advertisement to just drink the beer rather than worrying about categories.

Can. Pours a murky pineapple juice colour with lightish yellow/gold and thin white head. The aroma isn’t as juicy as I expected, however there is still some appealing pineapple, apple juice, lime, orange, banana, apricot, pineapple and crackers. Quite aggressively hopped bitterness, full of resin, pine and an oily mouthfeel. It lacks much fruit, although works into some grapefruit and lime.