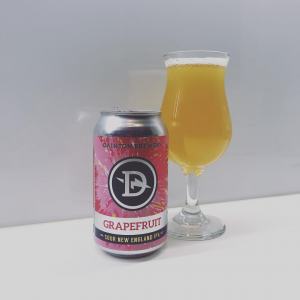 Dainton Family Brewery from outer Melbourne aren’t all that familiar to me. They’re not stocked in my usual bottle shop haunts and according to my RateBeer records I’ve only had one before. (the Red Eye Rye, three years ago – 3.9/5 if you don’t mind). I’ve noticed heaps of different brews on other pages though and Tim reviewed their Cranny Sour Gose a couple of weeks ago. They’re obviously kicking plenty of goals with a vast range, so I was happy to pick the Grapefruit Sour NEIPA when I was driving past Robin Hood Hotel. It does exactly what it promises. Grapefruit. Sour. NEIPA. Nice beer.

Can. Pours a hazy yellow with a white head that dissipates quickly. Aromas of tropical fruit (passionfruit, pineapple), grapefruit and lactose notes. Immediate grapefruit juice sourness, followed by tropical fruits and only moderate bitterness. Quite a full mouthfeel. The sourness is produced by the fruit rather than any funky bacteria’s.