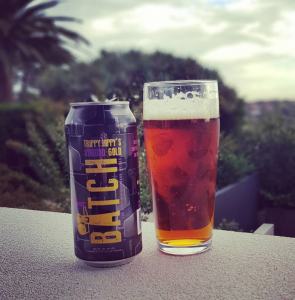 Batch Trippy Hippy’s Voodoo Gold Golden Ale, the last of my specialty brews from @plonk_cbr. Ah @batchbrewingcompany god you guys make some awesome beers. This is no exception. A golden ale crafted with Voyager Voodoo malt which to be honest I’m not overly familiar with.
The beer.
Pours a luscious dark golden orange with a strong nose of mosaic hops and el dorado maybe? I’ve really only seen it used occasionally but it’s a very distinct aroma. Subtle malt, dark crystal I’d say with that deep orange colour doesn’t overpower the hops. A nice crisp American yeast finishes off with an orange style after taste at the back of the throat. I don’t normally like golden ales, they are normally a bit boring with strange maltyness. This has changed my opinion of golden ales. It’s spectacular and I put it down to the grain choice and clever hopping. Well done guys! Tim