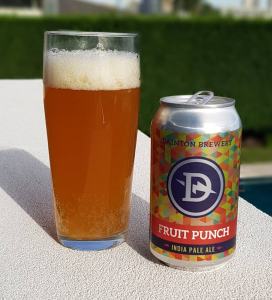 Dainton Brewery Fruit Punch India Pale Ale “Dainton Family Brewery started in 2013 and is located in Carrum Downs, Victoria. It produces many highly acclaimed brews, most notably their Cherrywood Smoked Rye Baltic Porter which won champion Australian Beer at the 2017 Australian Craft Beer Awards.” Some very interesting beers coming out of Dainton lately which is definitely a good thing, I feel like they have definitely reinvented themselves lately.
The beer, poured a golden orange with a strong thick white head with some strong lacing. Strong nose of passionfruit and pineapple with a strong fruity palate which makes sense given its an IPA “fruit punch”…… Nice medium mouthfeel with a slightly citrusy back of the throat which with the bitterness from the hops cutting through the fruit nicely. It’s slightly over-carbonated though which might be a result of the fruit over fermenting or slightly over primed, it doesn’t however detract from the over all taste which is really refreshing. Would be fantastic in summer after mowing the lawns!
Tim