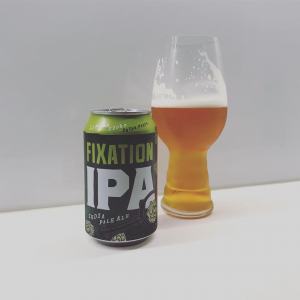 Fixation – noun – a preoccupation with one subject, issue, etc.; obsession.
To say @fixationbrewing has an obsession with IPA is an understatement. All four of their core beers are IPA’s (West Coast; IIPA; citrus IPA; and session IPA). A quick peruse of @Untappd found one classified as ‘sour – ale’ and one classified as ‘other’. Low and behold, the ‘sour ale’ is a sour Brut IPA and the ‘other’ is a wet-hopped IPA!!! They love IPA. And when you love IPA as much as Fixation, you better make sure your flagship West Coast IPA is a good one. Good? It’s brilliant. An Australian marker for what IPA should be. Full of flavour, yet balanced and capable of being drunk in multiples. I had this on tap a about three years ago and gave it 4/5, where is stood out amongst many others that night. It’s just as good out of the can, especially when it landed in that can less than a month ago. #freshas
A big thank you to Tom from Fixation for sending this up the Hume to Sydney for us 🙏
Can. Pours a bright orange/copper with solid white head that retains well and laces heavily. Heady aromas of fresh citrus and floral hops, with a touch of resin and underlying sweet caramel malt. Grapefruit and tropical fruit flavours, with pine, bitter/sweet orange marmalade, delicate citrus flower freshness, and a caramel malt background providing great balance and mouthfeel. Moderate and refreshing bitterness. A beautifully made IPA that doesn’t try to be too big, instead treading the very difficult line between big flavour and the subtlety a perfectly balanced beer provides.
4/5. Trent