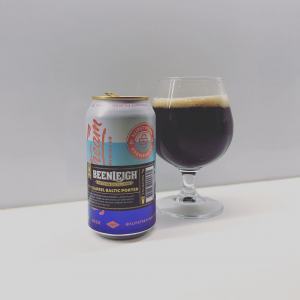 @slipstreambrewing x @beenleighrumdistillers Rum Barrel Baltic Porter is a perfect South East Queensland collaboration. The two year old Slipstream teaming up with the 140 year old Beenleigh to showcase the fruits their labour’s. There aren’t too many Baltic Porter’s made in Australia, but essentially they are a bloody big black beer originating from the Baltic’s (9.5% in this case). Sweeter and bigger than an English porter, they are also influenced from Russian Imperial Stouts, without the bitterness of heavily roasted malts and hops. I’m no rum expert, but I like it, and it certainly makes its presence known in this incredibly complex beer. A perfect slow, winter sipper.
A big thanks to Elisa from Slipstream for sending down this beer to Tim and I. I’m looking forward to having the second one in front of a fire pit 🔥. Can. Pours jet black with cappuccino coloured head that dissipates to a thin, oily layer. Heady aromas of rum and oak jump out, with the added complexities of raisins, prunes, esters, molasses, licorice and plenty of grog. Rich, warm and smooth, with a malty sweetness up front, along with dried fruit esters and hints of licorice. It then works into dark toffee and malts, but it’s not particularly roasty and is low in bitterness, although there is a noted spicy hop flavour towards the finish. Let’s not be mistaken though, these are all support acts to the massive groggy, rum and oak. Delicious stuff.
3.9/5. Trent.