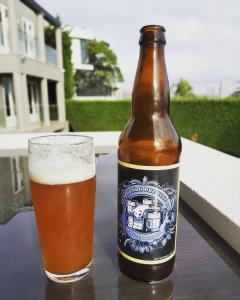 El Segundo Brewing Co. White Dog IPA El Segundo California USA. El Segundo Brewing Company is the product of founder, Rob Croxall’s love and passion for beers. More than anything, Rob has a knack for hoppy beers, much like @fixationbrewing in Melbourne. Being a brewer, he decided leave his longtime career in aerospace financing to establish his own microbrewery. Named for Rob’s dog, the White alludes to the use of 50% wheat instead of barley in this beer. Don’t be fooled though this is no wheat beer….
Poured a dark orange caramel with a pronounced white frothy head. Aroma of gooseberries, bready malt and slight citrus. Quite a warm boozy mouthfeel at 6.7% abv with a farmhouse banana flavour which is then annihilated by some aggressive hops sourced from Ca and New Zealand apparently. Not a bad IPA that’s quite experimental, I’m not sure this one cellars well as the citrus was lost however the malty grains aged really really well. Not bad, would love to try it off the tap. Donated by adam from @platinum_liquor thanks bud! Tim