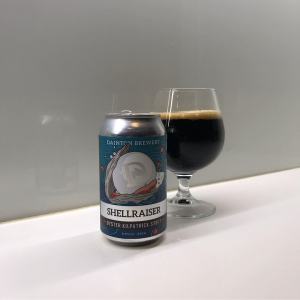 Stout and oysters are one of the great food/drink matchings. Every bit as good as Pinot and duck. The slightly sweet, slightly bitter flavour profile of stout sings with the brininess of oysters. Oysters have also been traditionally used in beer as a clarifying product but are now used for flavouring. Enter the @dainton.beer Shellraiser Oyster Killpatrick Stout, a play on the daggy but delicious grilled oyster with bacon and Worcestershire sauce. In collaboration with @brighttankbrewing , @van_dieman and @rockyridgebrewing , 110 dozen oysters were used in this delicious beer. The bacon is merely a trick of the mind though. There’s no bacon, just smoked malts.
Can. Pours black with a small, but steady cappuccino coloured head. The aroma is heavy with smoke, bacon, brininess and a vegetative hop. Big, rich mouthfeel, with bitter dark chocolate, hints of coffee and a slight milk sweetness that moves into only moderate smokiness (especially in comparison to the aroma), brininess from the oysters, bacon notes and Worcestershire sauce. Complex malts and just enough sweetness to mean the smoke doesn’t overpower, which I find can lead to a tired palate.